Top Posts
BiXBiT announced a new Bug-Bounty program as a...
Advantage Of Agen Slot
What are fundamental indicators?
Should You Trade Cryptocurrency?
Are we still able to trade foreign exchange?
How to Get Started With Upcoming Cryptocurrency
Trade Nation Review For Traders To Win Frequently
Five Easy Ways to Secure Your Home
5 Reasons to Convert Your XRP to USDT
How Cryptocurrency work: Trading Bot Overview
Home Block Chain Why Is Blockchain Security Critical & How Is It Implemented
Block ChainFinanceNews

Why Is Blockchain Security Critical & How Is It Implemented 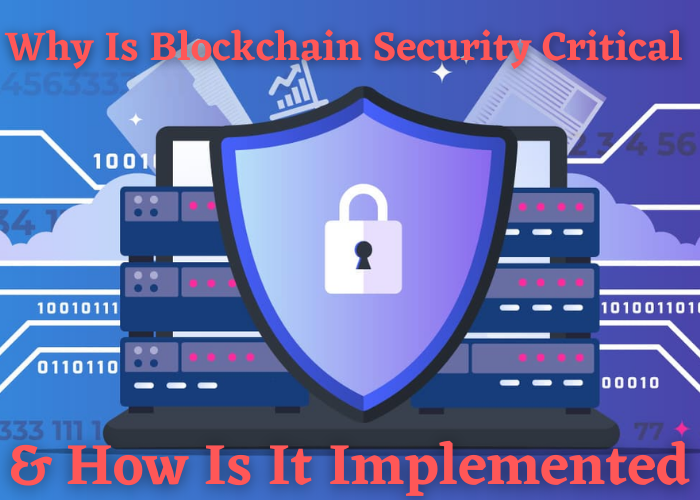 A blockchain is a public ledger that records transactions in a chronological order. It is a distributed database that is constantly growing and is secured by cryptography. The blockchain is the most secure way to store data, because it is decentralized, meaning that it is not stored in one place. Blockchain security is critical because it  has the potential to change how businesses operate. One study predicts that there will be a tenfold growth in blockchain jobs by 2024, and this includes jobs for data scientists and analysts. Without the right skillset, achieving the most optimal results is difficult.

Blockchain security is a critical component of the technology that is driving the next generation of the internet. The blockchain is a digital ledger that records transactions. It is a decentralized, trustless, and immutable system. The blockchain is a public ledger of all transactions that have ever been executed. It is a continuously growing list of records  , called blocks, which are linked and secured using cryptography. Each block typically contains a hash pointer as a link to a previous block, a timestamp, and transaction data. By design, blockchains are inherently resistant to modification of the data, and serve as a public, verifiable, and permanent repository of truth in a world of misinformation.

Cryptography And Its Role In Blockchains Security

Cryptography is the science of creating and solving codes. It is a process of transforming information, called plaintext, into a secret code, called ciphertext. A code breaker is a person who tries to decipher the code and make sense of the information. Cryptography is also used in blockchains to secure the blockchain.

How Do Private And Public Keys Work To Secure Data

How Hashing Helps To Secure Data

Hashing is a process that transforms a message or file into a seemingly random string of characters. This string of characters is called a cryptographic hash and is created by passing the message or file through a hashing function. Hashing is a one-way process, meaning that you cannot convert the message or file back  into its original state once it has been hashed. The simplest hashing function is the exclusive OR (XOR) function. This function accepts two inputs and returns a zero if both inputs are the same, and a one if the inputs are different. If we apply the XOR function to the words “secret” and “message” we get the hash “5baa 61e7.” If we change the word “message” to “not” we get the hash “58f9ca9e.” While any change made to the message will affect the output hash, reversing the hash back to the original message is mathematically impossible.

What is NFT and How Does NFT Work?

The Server Rejected One of the Recipients...

How People Make Money From Cryptocurrencies?